Holy Roman Empire Rules Today Irrefutable proof of the predictions in the book of Revelation regarding the beast and the whore, the secret cabal that rules the world behind puppet dictators and "leaders." KNOW YOUR HISTORY; HISTORY REPEATS, THE HOLY ROMAN EMPIRE: 1st REICH , 2nd REICH , 3rd REICH & NOW THE RISING 4TH REICH

As a researcher, Dave Cleveland has been connecting the dots for many years. His shelves are filled with newspaper clippings and news video evidence of a world that is already in a New World Order 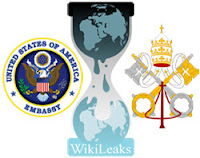 Dave Cleveland is a rare find. As a researcher his research is available for anybody to examine. People can draw their own conclusions. http://www.holyromanempirerules.blogspot.com/  Have you heard of the Blue Mass and the White Mass and the Red Mass and the Black Mass? Google " black mass, " and see what you'll find.

With " R J, " www.republicbroadcasting.org Dave spells out the details of the 4th Reich that is coming in to place right now. Have you heard of the Vatican Bank? More disclosures by WikiLeaks will show more of the evidence on a Vatican conspiracy to take control of the world's money system, the world's religions and all governments. A new inquisition will come.

In Revelations 9: a 13 month war is depicted. Could it be that April 19th is the significant date which the next World War may begin? This could begin at the Euphrates River…

All world currencies are in chaos, by design.

Many of the world's so-called leaders are Freemasons, Jesuit Priests or players with the CFR. They are all buddies, role playing to fool us all, to lull us to sleep.

It's time that we wake up. …The Supreme Court members are involved with the Vatican. In this 2 hour

interview Dave Cleveland spells out for " R J, " how significant Vatican History is in the NWO that we are already in. Santa is an expression of Satan. The Christmas tree is an expression of the Babylon penis pagan (baal) worship. Google the Black Mass and see

COME OUT OF BABYLON: THE NEW WORLD ORDER TOWER OF BABEL KINGDOM

Pope: Weathercock Symbol is the Betrayal of Jesus...Red Dawn...

The Origins of Valentine's Day

EASTER is the BABYLON QUEEN of HEAVEN - BIRTHDAY CAKES & WISHES

The Holy See Pyramid Eye in & on the Roman Catholic Church

LATIN KINGDOM is on the USA DOLLAR BILL

The Woman (=Church) Rides the Beast (=King or Kingdom) Revelation 17:3

Book of Mormon Speaks from the Dust
http://bookofmormonspeaks.blogspot.com/